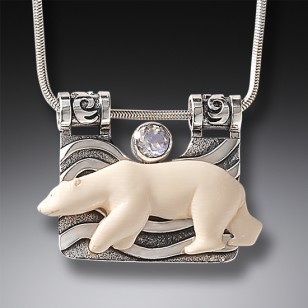 Fossilized Bear Jewelry: Getting Creative With The Past

Yes, the illegal trafficking and sale of ivory on the black market is criminal conduct that carries steep sentences. But what people tend to forget is that there’s a big difference when compared to fossil jewelry shaped from ancient fossil ivory. In the latter case, dealing is generally unregulated to a point where it’s a free for all. Derived from the over 300-year-old remains of ancient flora and fauna -including mammoths, dinosaurs, and walruses- these are some truly unique, hassle-free pieces of jewelry. Given that this poses no immediate danger to endangered animal species, it isn’t hard to imagine why fossilized bear jewelry is fast outpacing ordinary ivory in terms of popularity.

From cute pendants and earrings to breathtaking necklaces and rings, there are no limits to creativity when a jeweler sets his mind to the task. Using ivory dug out from the earth or scrapped from underground rock formations, seasoned craftsmen get to work, imparting detail, style, and character to what was once lifeless and neglected beneath the earth. With the dust and dirt carefully cleaned off, what follows is a process of intricate and thorough polishing to bring out the raw shades and hues that have been dissolved into the ivory over thousands of years.

A Roller-coaster Of Shades and Hues

It’s interesting how the final shades and hues come to be though. Mineral components in the soil and surrounding rock seeping into the ivory over the years are responsible for the matured textures and colors typical of fossilized ivory jewelry. Green blue from copper, brown from iron and orange from manganese, you’ll soon realize that ivory differs from region to region. For instance, Siberian ivory is whiter than that derived from places that receive far less snow.

With that said, the two most sought-after pieces of fossil jewelry are those crafted from the ivory of Walrus and Mammoth. What’s distinctive about Mammoth ivory is the crisscross pattern of fine lines just beneath the surface. But being essentially teeth, Walrus “ivory” has an inner layer of pulp and a shiny outer layer of hard enamel.